"Every birth is a snowflake" - An Empowering VBAC Birth Story 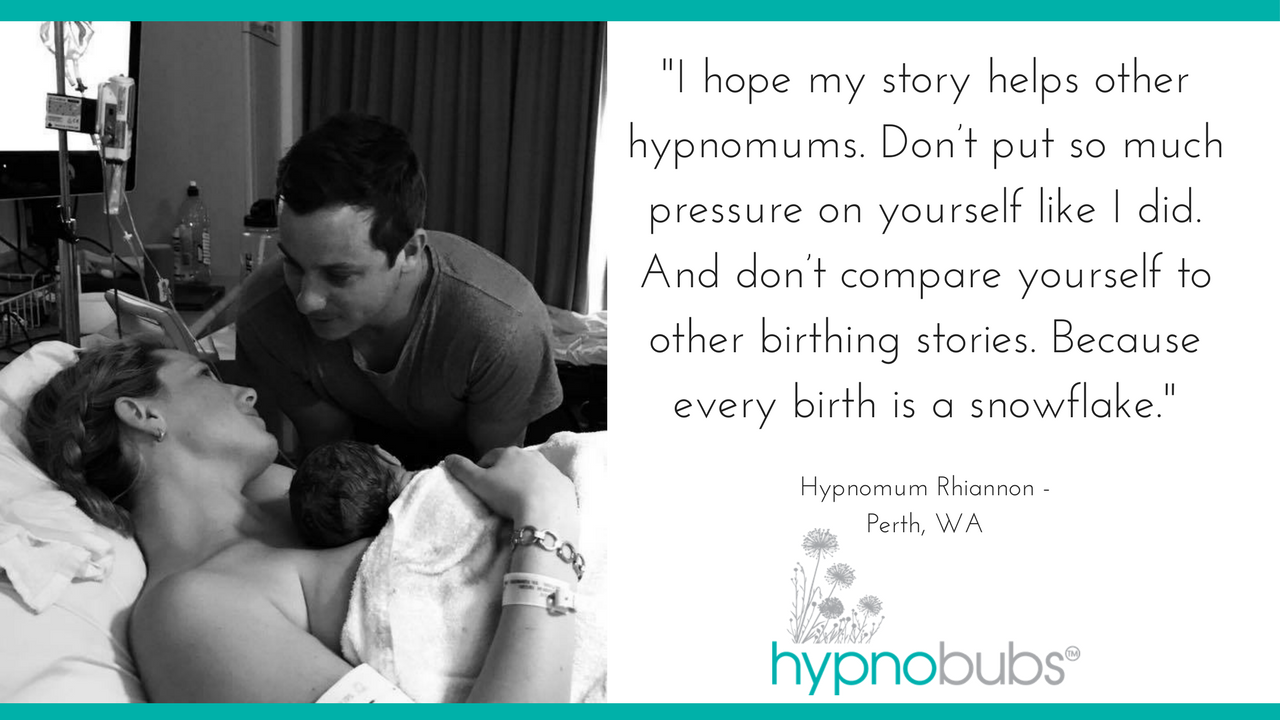 I just wanted to take the opportunity to share my birth story with you all after successfully giving birth via VBAC yesterday morning at 8:20am on 8th of Feb to our beautiful little girl Elaina Rosalind Carmody.

I love Hypnobirthing mainly because it is so empowering. I hypnobirthed for my first, 2 years ago and unfortunately ended up having a C-Section but I made the best choices for me and my baby at the time. Second time around I was determined to have a natural birth so we got private health cover, chose a great doctor and headed to Perth at 38 weeks to wait for the day bubby decided to arrive.

If anyone in Perth (or who is having their baby in Perth) wants a VBAC or just an amazing doctor I HIGHLY recommend Dr Kenneth Nathan at St John of God Mt Lawley. He was an absolute GODSEND and I’m not sure I could have made it through without him. He absolutely KNOWS HIS STUFF and inspires confidence. He was amazing support leading up to and during the birth and informed us of every pro and con and other significant detail to every decision we made along the way. I had a completely different birth to what I had “planned” except where it mattered.

I had a feeling that Bub was arriving early and just past 39 weeks started having surges quickly and close together at bedtime. Unfortunately it was just a practise run though and the week that followed was non stop Braxten Hicks which left me exhausted, emotional and stressed. 40 weeks came and still no sign of Bub wanting to budge despite me trying everything under the sun to encourage spontaneous labour so I agreed to a stretch and sweep which I was told I did not have to have but it was highly recommend and these were the risks if I didn’t. We had come to Perth for a VBAC and I wasn’t going to jeopardise that by ignoring good advice when given.

The next morning I started having cramping style surges around 4am. We passed the time going about our day as things were slow. By 2pm I was getting a bit over it so we called the hospital and went in for a checkup since I was a VBAC. I was only 2cm but fully effaced so was told it was real labour and we’d be staying. Finally!!! After a week of “fake” labour some progress.

By 9pm though nothing had picked up despite all my walking, bouncing, tracks, Clary Sage, etc, so they gave me some sleeping tablets, my husband went home and I tried to rest. At 11:30 my surges woke me again, so I called my husband and we got back into it. I really loved the Glove of Endorphins track, and I’d pretend my husband had them on too when he’d do light touch on my back (I imagined them like glowing exfoliating gloves hahaha).

By 2:30am though I was exhausted after a week of “fake” labour and nearly 24hours of pre labour and not making any progress so I decided I wanted an epidural so I could rest. My Dr had said to me that an epidural is a good idea but only after 6 cm so the mother can be upright and use the tone of her pelvic floor to help baby enter the pelvis the right way. The surly midwife who liked to talk through all my surges insisted she had to do a VE and put me back on the monitor before she would call my doctor (which we insisted upon as I think she would have quite happily just organised the epidural) and told me I’d made no progress.

By the time Dr Ken arrived and told me how the whole thing would go and what the risks were if I decided to have an epidural I had miraculously gone to 6/7cm!!! He was so proud of me and made such a fuss of me. It was such a pick me up. We agreed to rupture my membranes to get things going (which I had been worried about causing a prolapsed cord and he was able to tell me all about how Drs cause that and what they’re supposed to do to ensure it doesn’t happen by controlling the fluid release and guiding the head down so it doesn’t slam down into the pelvis). After that I had an epidural sitting up in bed and was able to rest for an hour before things really revved up. I was fully dilated and it was time to breathe bubby down and out and it felt so much better having somewhere to direct all that energy. I was able to flip over onto all fours and although all the cords (monitors, catheter and epidural) were annoying and in my way at least I was in the best position to help guide my baby out. And let me tell you it was a lot harder than I thought it was going to be!!! I definitely vocalised...A LOT!! I most definitely did not look like mother Zen in the birthing pool of calm. But I didn’t care because I was doing what I needed to do and I had made an educated decision every step of the way. I had a new midwife by this stage and she was wonderful, whispering gentle encouragement and reminders to breathe and not hyperventilate by my ear.

I have a narrow pelvis at the front so had to push bubby back further. Once I finally got her past my spines and pelvic floor (which had quite good tone I’m told making it more difficult) my perineum was becoming swollen and Dr Ken could see it would take me a good hour of pushing to get past that last layer of tissue and it would likely tear quite badly by that stage and asked if I wanted some help. With cramping style surges since 4am the previous morning and next to no sleep I was quite happy to have a little help. I didn’t want to flip over onto my back and put my feet in stirrups but it was the lesser of 2 evils. I was given a small episiotomy off to the side so Dr Ken could control any tearing and told he was not pulling my baby out for me, that I needed to push and he would guide it. It didn’t take much after that and a dripping, slimy baby girl was plopped on my chest. And she’s a whopper!! 53cm and 4.18kg!! No wonder she was hard work! But people said my first caesarean birth was because my baby was 3.72kg. Pah! What rot.

It’s not the birth I had pictured or planned but then every woman and every baby are different. I had several interventions I didn’t originally want, but this birth was so different to my first and I made the choice based on my own research and good advice. And most importantly, I achieved a beautiful, natural birth, I was loved and supported by a wonderful husband and I am healthy and my baby is healthy.

I hope my story helps other hypnomums. Don’t put so much pressure on yourself like I did. And don’t compare yourself to other birthing stories. Because every birth is a snowflake.