I was able to accept the twists and turns that occurred and was excited to finally meet my baby girl. 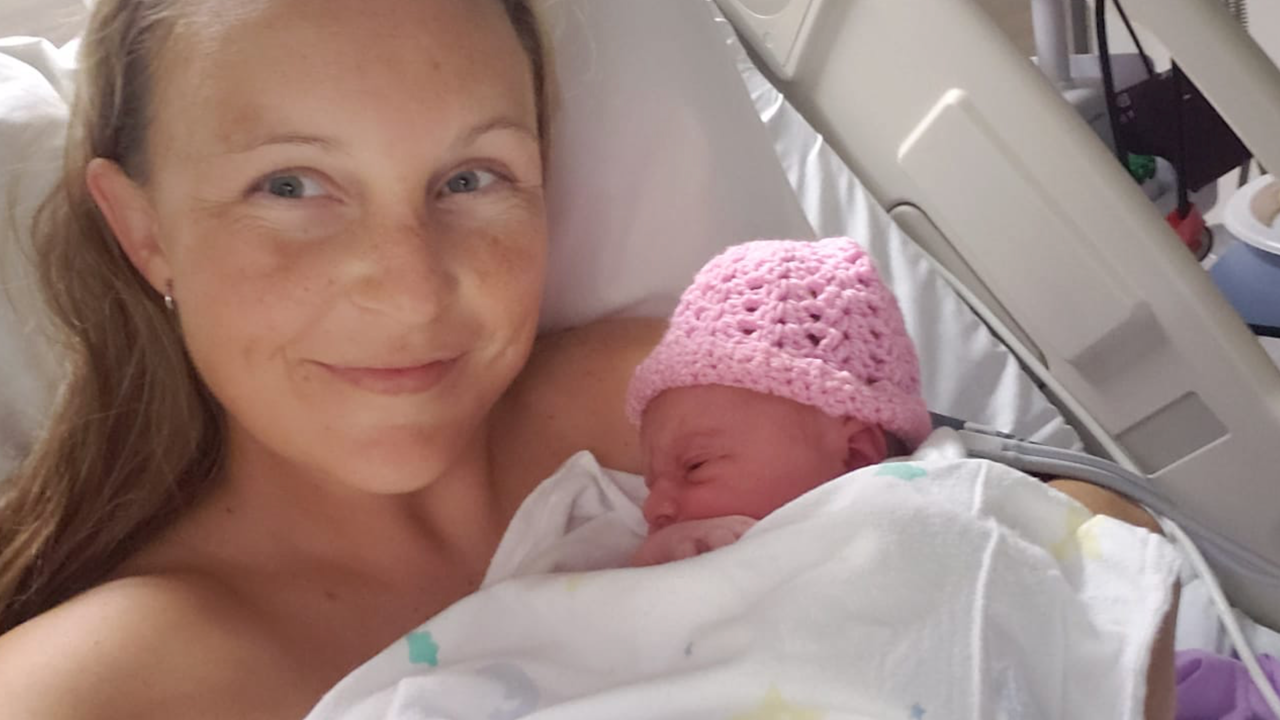 My guess date was the 23rd of June 2020, I went to my 41 week appointment and they wanted to attempt to rupture my membranes at 41 +5. On 41 +3 I had a stretch and sweep to try and bring on labour as I wanted to avoid as much intervention as possible. The night of my stretch and sweep I started to get some very light surges they were strong enough to wake me up but not painful, they were irregular and continued into the following morning. I was able to continue with my day as normal.

At about 1pm things started to ramp up and I was having surges that were lasting between 1 and 2 minutes and about 4 minutes apart. I called the hospital at 4pm to get their opinion, they said I was in active labour but because my surges were still a few minutes apart and still between 1:30 and 2 minutes they suggested I stay home and rest as much as possible. I laboured at home until 3am when I no longer felt comfortable and we decided to go into the hospital.

We arrived at the hospital at 3.30pm and I agreed to a VE. I was 4cm and they were happy for me to stay. They ran the bath for me at this point. I got into the bath and laboured in there for about 2 hours but I did not find this very comfortable so decided to get out. I laboured on the bed on all fours with the back of the bed up for most of my labour. After 4 hours I was checked again, at this point I was 7cm, I felt so disheartened by this as I had been in labour for 18 hours with no pain relief and felt I was reaching my tolerance threshold. I was using my breathing techniques from the very beginning and I felt these were so beneficial. I also had the hypnobirthing tracks playing, I found the affirmations one the most helpful and listened to this one on repeat a lot. We also had a salt lamp on and diffuser with Clary Sage in the room.

Another 4 hours went by and I was checked again, at this stage I was now 8cm but babies head was tilted to one side so she was not fulling pushing on the cervix which was resulting in my body not being able to dilate well. I continued labouring on all fours getting on and off the bed for another 4 hours. With each contraction I was putting one foot up on a stool to try help baby turn her head. At my next check I was still 9cm on one side of the cervix but the other side was still around 8cm and baby had turned head the other way. Two hours went by and the midwife suggested rupturing my membranes to try and help baby straighten her head up and put as much pressure on my cervix as possible. I agreed to this. After having my membranes ruptured I continued to labour and was checked after 3 hours. It is now 8.30pm and I have been in active labour for 31 hours, I was still 9cm. The baby had now turned and was occiput posterior (back to back). My midwife was truly amazing and was trying everything she could to help me achieve my birth wishes but things weren’t progressing. She recommended we try the syntocinon drip to make the contractions stronger and hopefully help the cervix open that last 1cm. By this point I did not think I could deal with any stronger contractions. After a discussion with my husband and nurses I decided to get an epidural, and have the drip. It took a while for the anaesthetist to come and deliver the epidural, once the epidural was in the began increasing the dose of syntocinon. As soon as this happened the babies heart rate would drop during each contraction. A obstetrician was called into the room to check how everything was going. As the baby was becoming destressed during the contractions it was decided I needed an emergency caesarean. I have always been against having a caesarean and it was always going to be an absolute last option for me, but by this point my baby was not coping and we needed to get her out asap. I feel like practising my hypnobirthing affirmations was so important and helpful for my whole labour, I was able to accept the twists and turns that occurred and was excited to finally meet my baby girl.

The last 45 minutes of birth flew by and was a rush of doctors, surgeons and midwives. There was talk of me having to be knocked out but thankfully that didn’t happen and my baby girl was placed on my chest for skin to skin which I was so thankful for.

I am so glad that I did the Australian hypnobirthing course and I am positive the breathing techniques is what got me through 31 hours of active labour with no medical intervention. My birth wishes definitely didn’t go how I wanted but I can still look back on my birth positively and know that I did everything I could to bring my baby into the world as healthy and safely as possible. I can’t thank the midwives I had enough for letting me try everything possible to have a vaginal delivery and let me labour for as long as possible without intervention, they were so supportive of all my choices and for most of the labour it was just my husband and I in the room and they would just check in occasionally. I would highly recommend pregnant women to practise hypnobirthing and create their positive birth!