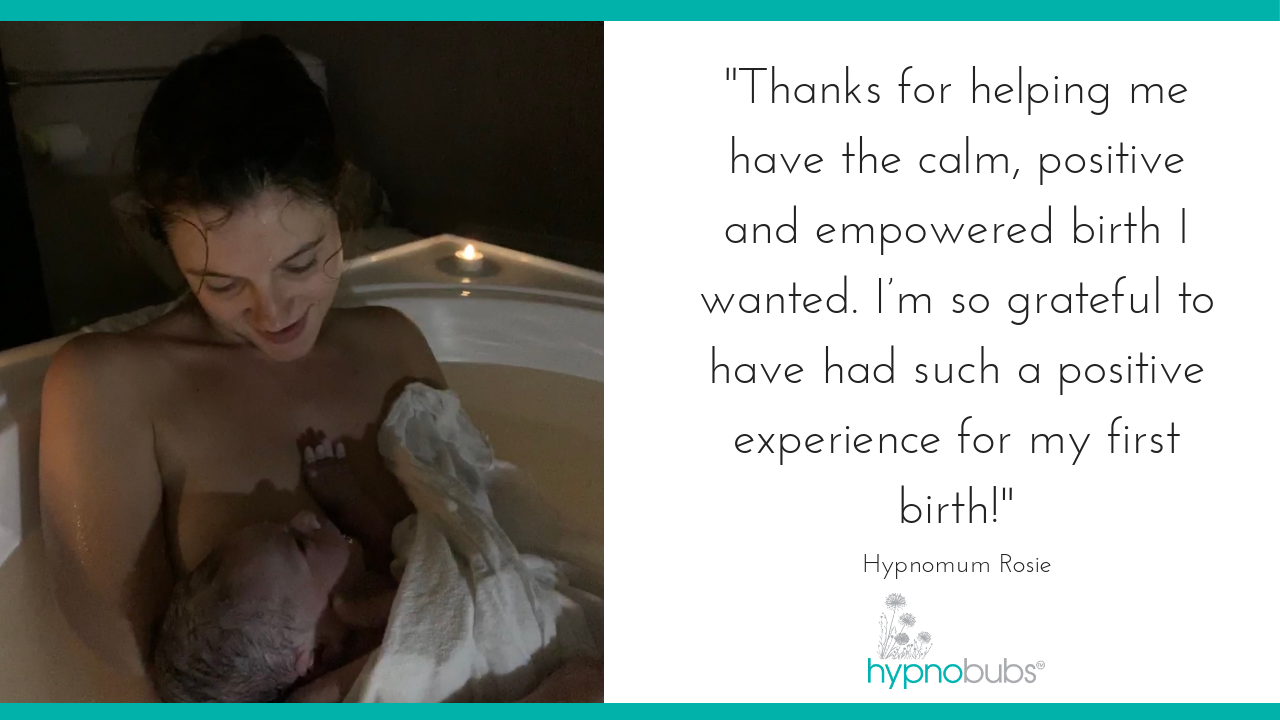 My little guy was born 12 days past his due date, one day before the hospital had me scheduled in to be induced. At first, I was quite upset about the possibility of an induction, but the hypnobirthing approach helped me to let go and decide to calmly meet whatever path my birthing took. I was still keeping my fingers crossed he would decide to come on his own before then so I felt really positive and excited when I finally went into labour naturally.

I woke up a few times overnight with some lower belly pain and by 4am Thursday morning my surges were about 10-15 mins apart and uncomfortable enough that I needed to get out of bed. I spent the next 14 hours at home as they gradually increased in frequency and intensity, and I used a TENS machine and listened to the affirmations and meditation music while my partner timed the surges.

When we got to the hospital the midwife in the assessment centre said something about maybe sending me home, which I was horrified by because I was having very frequent and intense surges at this point! She then did the exam and was surprised to find that I was already 5cm. I said, “I told you I wasn’t going home!” She replied that she hadn’t thought I was that far along as I was much calmer than what she’d expect from someone already in active labour. She said the TENS was obviously working well for me, but she couldn’t see all the breathing, visualisations and affirmations I had been using too. I don’t think I would have been so calm without having learned all those techniques.

I laboured for 4 hours at the hospital before being pretty disheartened to hear I had only dilated to 6cm. The midwife said she could see that my waters were bulging but not breaking and that may have been preventing him from descending further down the birth path. I had requested no ARM in my birth preferences, but after discussing the options with my midwife I decided it would be the best choice for me at that point. I felt fully informed and consulted, and I still think it was one of the best things I did. Things ramped up pretty fast after that.

I had taken off the TENS which wasn’t helping much anymore and got into the shower, which felt fantastic, so I asked them to fill the bath (I had been wanting a waterbirth but was unsure if I’d want to take off the TENS). By the time I got in the bath, I was in transition and felt like I’d hit a huge wall. I was telling my partner that I was too tired and couldn’t do it anymore and wanted an epidural and a nap before I had to push him out!! I find this quite funny looking back but at the time I felt really hopeless and panicked. Up until that moment I had been so calm and positive so it was a really sudden change. My midwife suggested trying the gas instead. It took the edge off a little but I think mostly it helped to refocus me and get me breathing deeply again. I used it to breathe through contractions for maybe an hour and then came off it when I was starting to push. My positive mindset had returned and I remember telling my partner “I can do this!” Pushing was harder work than I’d anticipated and I was very tired by that point but we got there eventually! The breathing/bearing down technique didn’t seem to be enough to get my 9-pound boy out and I needed to hold my breath before exhaling and do some really big, strong pushes.

He was born into the water at 2 am Friday and then lifted up onto my chest. He was so calm and alert, no crying, just looking up at me and making little noises. I’m so grateful that my birth was such a positive experience, and really happy I chose to do the online course to prepare. Those first few moments holding our newborn son in the water were so happy and calm, a very special memory to look back on.

Thanks for helping me have the calm, positive and empowered birth I wanted. I’m so grateful to have had such a positive experience for my first birth!
Kind regards,
Rosie